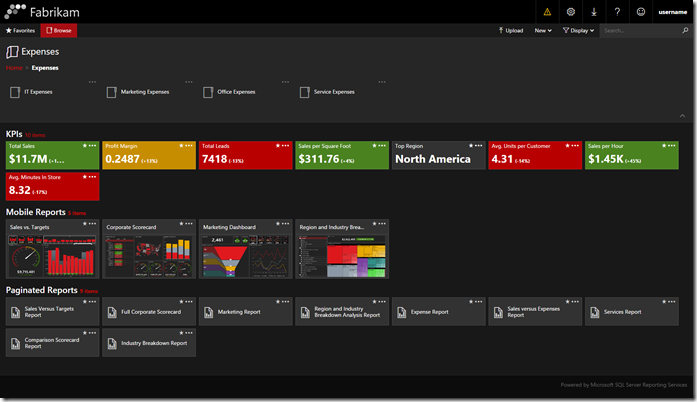 That would have been the extent of the Microsoft Business Intelligence roadmap blog post if I’d written it (and is probably why I wasn’t picked to do so.)  But that was the takeaway that folks seemed to have after this week’s PASS Summit and after reading that post.  Chris Webb had a great write-up of the event where he said “In summary I can’t remember the last time I felt this positive about the future of Microsoft BI.”  Marco Russo tweeted on Wednesday “I’ve seen the most consistent, coherent, inspiring #msbi roadmap in 10 years.”

And the star of the show?  The Box.

No, not the movie from 2009 with Frank Langella and Cameron Diaz.  I’m talking about SQL Server 2016 and all the BI goodness that is coming with it.

The sessions given by Frank Weigel and Riccardo Muti were jammed with attendees (both had to stop people from coming in) who tweeted their excitement throughout with an almost religious fervor, especially when it came to SQL Server Reporting Services.  Think I’m exaggerating?  Look at this – 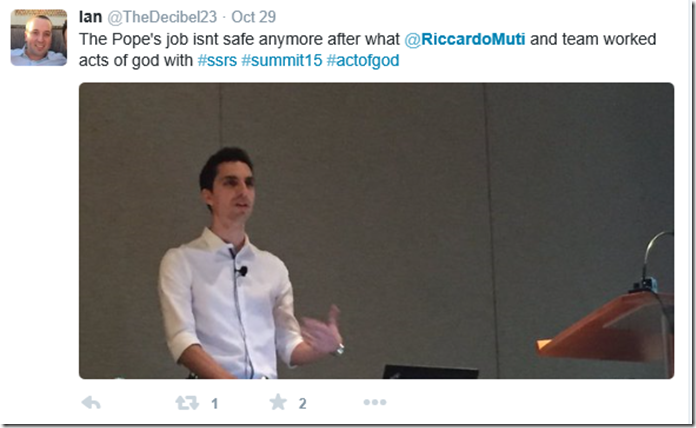 Sheesh – who knew the passion one would inspire by giving people the ability to re-position report parameters and export to PowerPoint.  Or maybe it was in response to the announcement that there will be support for Mobile Reports and KPI’s based on Datazen technology at GA in Reporting Services 2016 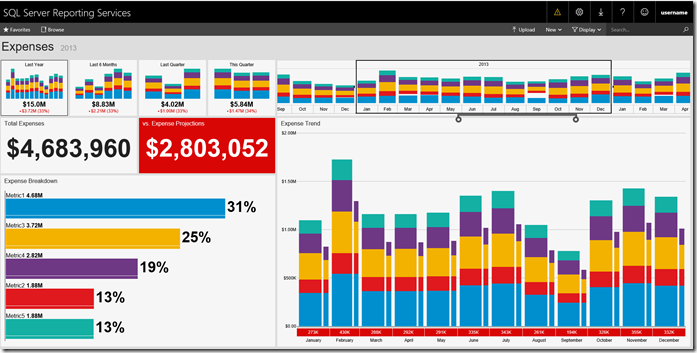 I could probably end the post right now with “Woohoo, we win!  We win!  Victory dance!  The box is back!”.  But if you remember my original Game Change post, as excited as we all are, are non-PASS attendees going to have this reaction?  I mean, I’m sure Telly Savalas would kill it every time saying “We’re all born bald, baby!” at the keynote of the annual meeting of the Bald Headed Men of America.

But how does that play when he goes on the road away from his fellow baldies?  Do the folks with hair get just as excited, or does someone stand up and say, “Wait a minute.  I thought you were dead?”  Which is exactly what I’m sure some customers will say when this is demoed to them for the first time.  Several jokes and tweets were even made during PASS about how SSRS finally looked like something built this century.

This meant, however, sales folks and partners talking to customers about Microsoft BI generally avoided showing the product despite it having some incredibly powerful capabilities because “it looked like it fell out of an ugly tree and hit every branch on the way down”.  I actually had a customer say that about Reporting Services.  Or was it about me?  Either way, the meeting didn’t end well.

That meeting would have been much, much different now, for a number of reasons that I’ll call out two of –

1. Everyone loves Datazen.  Okay, I’m sure it’s not EVERYONE, and the product isn’t perfect.  But that’s the beauty of it being rolled into SSRS – where the product is missing certain features (lack of WinAD group support, etc.) is where Reporting Services is strongest.  And vice versa.  The interest in Datazen from Microsoft customers has been off the charts since they were acquired in April.  That’s due in no small part to the fact that the product demos incredibly well to the same people you’d never have dared showing Reporting Services to in the past, despite that functionality being something they were looking for (as I’ll demonstrate in the second point).

It makes perfect sense to bring these products together, and I’ll go into more details about what this all means for Datazen going forward in a separate post.

I’ll add one last thing, and this is the only time I will address this – if you heard the news that Datazen was being added into Reporting Services, and even for a moment had the word “ProClarity” pop into your head, STOP IT.  The difference between the two situations are so stark I can’t possibly cover off on all of them.  Even my pal AJ here at Microsoft, who came here in that acquisition ten years ago, laughed off the comparison.  But here’s two of the biggest differences:

2.  Let me tell you a true story  – one of my old customers brought in a solution from a competitor a couple years ago to replace another BI solution they had (NOT Microsoft’s).  This instance runs the majority of their reporting internally.  Their report looks like this –

Oh, I’m sorry.  I accidentally posted a picture of a paginated report in Reporting Services 2016, didn’t I?

Yes, that’s because their report used functionality that could be done easily in Reporting Services using nothing more than Report Builder.  And their main method of distribution for these reports?

And did I say one customer?  I meant to say MORE than one customer who had brought in our competitor’s product was using it solely to do reports like this!  I couldn’t believe it – all you heard was about how sexy and cool this other product was, yet the reports I saw people building with it were paginated reports often distributed via email!

So why were they meeting with me, you ask?  In essence, here’s what each of them said –

“Well, we’re a big Microsoft customer and we’ve run into some limitations with our current BI solution, so we were hoping to see if Microsoft had something that could provide them with a more holistic solution.  You know, something that would scale out to the entire organization, tie into our current security infrastructure, offered a great hybrid story that included both self-service and enterprise reporting options, plus mobile options for all device types and can easily surface the data in programs like Excel and PowerPoint.  Oh and it had to sit on-prem, because they weren’t ready to move everything to the cloud yet.  Did we have anything like that, either now or in the near future?

Your damn right we do.  Because the box is back.